I have four words to say to you: It’s time to rumble.
(Not to worry, it’s not an actual brawl but more of a let’s-show-Montana-how-much-we-love-her-by-voting-on-facebook type of a brawl).

You see, Montana has made it to the final round of voting in a quest to host the Social Media Tourism Symposium (known as #SoMeT13US on twitter). We’ll be facing Alabama tomorrow (Tuesday, April 2 from 8 AM – 8 PM, MST) and the destination with the most votes will be the host of this year’s conference.

Now in all fairness, I’ve got to give kudos to Huntsville and the entire state of Alabama. I’d say they are one of the only states who can rival Montana in terms of competitiveness and they’ve been pulling in some major numbers throughout the competition. Plus, we know they’re going to bring their A game tomorrow and I must say with total sincerity that you–Sweet Home Alabama–are a worthy opponent.

But here’s the thing: Montana and Montanans are awesome. We rally together to help one another. We have Montana pride. We have moxie. We are tough cookies. (And heaven knows this messy-haired blond girl loves tough cookies).

And tomorrow, Montana needs YOUR help. Our state needs as many Montanans and Montana-lovers as possible to rally together and vote. Why? Well, we can’t do it without you. To put it in perspective, Huntsville has a metro area population of around 500,000 people, a number that is also knows as HALF of our ENTIRE state’s population. To put it bluntly, we literally need every vote we can get. And if you’re not sure why to vote Montana, allow me a few minutes to persuade you.

1. A River (literally) Runs Through It.

2. Marie Osmond and Dan Seals sing a song called “Meet Me in Montana” not “Meet Me in Alabama.”

4. Montana is for Badasses. And we have the facebook page to prove it.

5. Friendliness. While the South is charming (I’ve fallen victim to a southern gentleman’s charm in my day), Montana definitely takes the cake when it comes to friendliest folks.

6. Football. We live it, love it, breathe it and lose sleep over it (much like the fine folks of Alabama). We’re happy to report that Big Sky Country has produces some fine football players that are both talented and nice, including Kroy Biermann, Marc Mariani, Colt Anderson and Lex Hilliard.

7. Montana, like the lady she is, still has a sense of mystery and charm that leaves you wanting more. 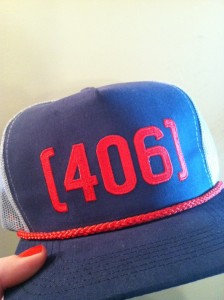 9. Local brew. With locally crafted beer with names like Moose Drool, Trout Slayer, Face Plant and Pig’s Ass Porter, you know our beer is as inspiring as Montana’s wide-open spaces.

10. Even Alabama loves us. Check out this article from the Huntsville Times.

Now, get to voting (please).

When We Travel Responsibly, We Can Travel Confidently

Glacier National Park: What to Expect

5 Ways to Explore the Bitterroot Valley