2010: Resolutions for this year

Well it looks like another year has come and gone. Sometimes I look back on the last 12 months and can hardly believe how fast they cruised by me. But now, it’s on to 2010!

Here in Western Montana, 2010 is a BIG deal. Mainly because we’ve got our party pants on as we prepare to celebrate the centennial year of Glacier National Park. More on that later…

For now, I want to share some of my “Playing in Western Montana Goals” for this year…
1. Hike to Avalanche Lake in Glacier National Park.
2. Eat a Bubba Burger.
3. Convince a “jammer” to let me talk in his microphone on a red bus tour. 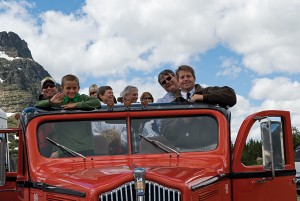 5. Cruise the zip line at Whitefish Mountain Resort.
6. Eat as much huckleberry ice cream as possible.
7. Kayak Brennan’s Wave.
8. Ride “The Shadow” on Flathead Lake.
9. Hit up every ski area in Western Montana: Snowbowl, Blacktail, Lookout Pass, Lost Trail, Turner and Whitefish Mountain Resort.
10. Go on a “Sun Tour” in Glacier National Park.
11. Belt out some Montana-inspired tunes at open mic at the Belton Chalet. And while wer’e on this subject, I’d also like to belt out some girly tunes at open mic in Whitefish.

Embark on a Backcountry Ski + Yurt Experience in Western Montana